November was another unconvincing month for the equity markets with increased volatility as political uncertainty continued to test the markets.  With the month coming to a close there were also some signs that the trade war tensions between the US and China might at least be thawing…

November was another unconvincing month for the equity markets with increased volatility as political uncertainty continued to test the markets.  With the month coming to a close there were also some signs that the trade war tensions between the US and China might at least be thawing. Following a meeting at the G20 summit in Argentina, the two countries agreed not to impose any further tariffs for 90 days, to allow talks to take place.

Away from stock markets the oil price fell below $70 a barrel for the first time since April which may assist continued economic growth.

With the market sentiment maintaining a cautious stance, global economic fundamentals still remain positive with all 45 countries in a recent OECD study expecting to sustain continued growth in 2018 and 2019. Global GDP is forecasted at 3.7% for 2019. 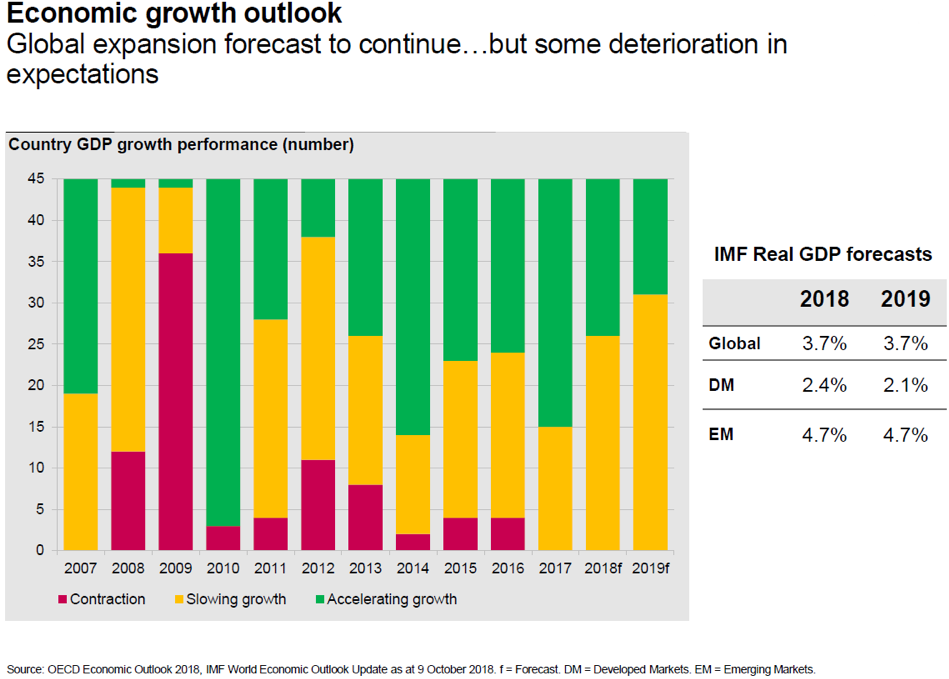 Despite the political chaos in the UK there was plenty of good news for the economy in November with figures for the third quarter (July to September) confirming that it had grown at 0.6%, three times faster than the equivalent rate in Europe.

There was more good news as figures showed that wages rose by 3.2% in the same three month period, the fastest rate of wage growth for almost a decade. However, people did not appear to be spending the money on the high street, which once again lost out to online shopping in the Black Friday/Cyber Monday bonanza.

In further positive news, profits at the UK’s publicly listed companies jumped nearly 14% in the third quarter of the year, pushing total profits over the last 12 months to a record £217.9bn.

The FTSE 100 closed November down 2% at 6,980 whilst the pound had a relatively quiet month despite the continuing uncertainty over Brexit and ended the month trading at $1.2748.

November saw Theresa May agree a Brexit package with the European Union, an agreement which according to the Brexit campaign group “Leave Means Leave” is ‘the worst deal in history’ with the UK paying £39bn and getting nothing in return.

According to Downing Street, it is the best possible deal and a triumph for the Prime Minister’s dogged diplomacy, after all, it is vastly superior to a Canada or Norway-style deal, the dreaded ‘no deal,’ or staying in the EU. It is a deal that ‘delivers on the result of the referendum’ and the full Government publicity machine has been wheeled out to support it.

We shall see next week how well received the agreement is, when the MPs vote on the deal.  With Conservative MPs and ex-ministers lining up to criticise the deal, it appears that the outcome of the vote will be just as predictable as Anne Hegerty being ruled out of a bushtucker trial on medical grounds; perhaps Noel Edmonds could fill his free time by adding some extra drama to the deal or no deal unveiling ceremony.

If the anticipated no deal verdict is reached, it is likely that the opposition will table a motion of no confidence in the government, leading to a General Election. Quite possibly there will be more late night meetings and trips to Brussels and a new deal will come back to parliament. Quite possibly Theresa May will be replaced as Prime Minister. Quite possibly we could have a second referendum – the so-called ‘People’s Vote.’

The Brexit scenario remains extremely clouded, but as December progresses the picture may become a little less murky, if only because some options – almost certainly the current deal – will have been ruled out. 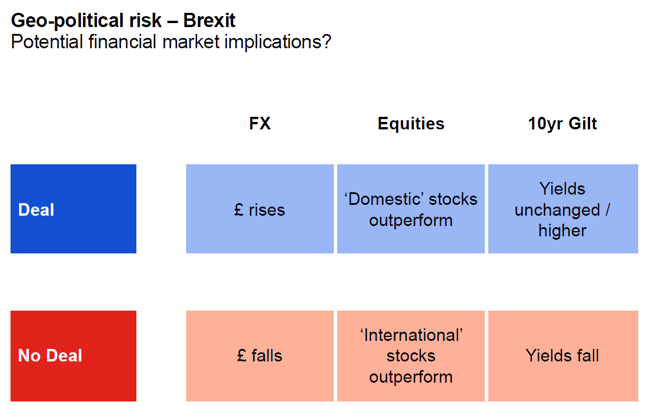 The big story in Europe came at the end of the month as the worst civil unrest since 1968 broke out in France.

The Gilet Jaunes (Yellow Jackets/Vests) movement began three weeks ago as a protest against Macron’s climate change inspired fuel tax rises. But in reality it goes deeper than that as protesters claim that Macron is a ‘president of the rich’ who does not care about the concerns of ordinary French people and the higher living costs they are facing.

A recent poll showed that Macron had broken new ground by becoming the most unpopular French President ever at this stage of a Presidency – he is roughly 1½ years into a five-year term – with populist leader Marine le Pen (whom he beat in the Presidential election) now more popular.

Quite where Macron goes from here is anyone’s guess. It is not just the fuel protests: growth in the Eurozone has slowed to a four year low, and France still has a high level of unemployment – 9.3% in August, which is far closer to the 9.7% of Italy than it is to the 3.4% in Germany.

In other news, the government in Italy continued to defy the EU over its proposed Budget – although there were no such budgetary worries for France and Germany as they agreed a new budget for the whole Eurozone.

Neither of Europe’s major stock markets enjoyed a good month. The German DAX index was down by 2% to 11,257 and the French index fell by a similar amount, ending November at 5,004.

Despite, and in part due, to the various political issues that continue to play out in the public domain, Europe as a whole looks relatively attractive from a valuation perspective with the current Price/Earnings and Price/book ratios both currently trending below their historical average. Should we see an easing in the political tensions or an overshoot on relatively low earnings expectations, Europe could be primed for a strong recovery as we move into 2019. 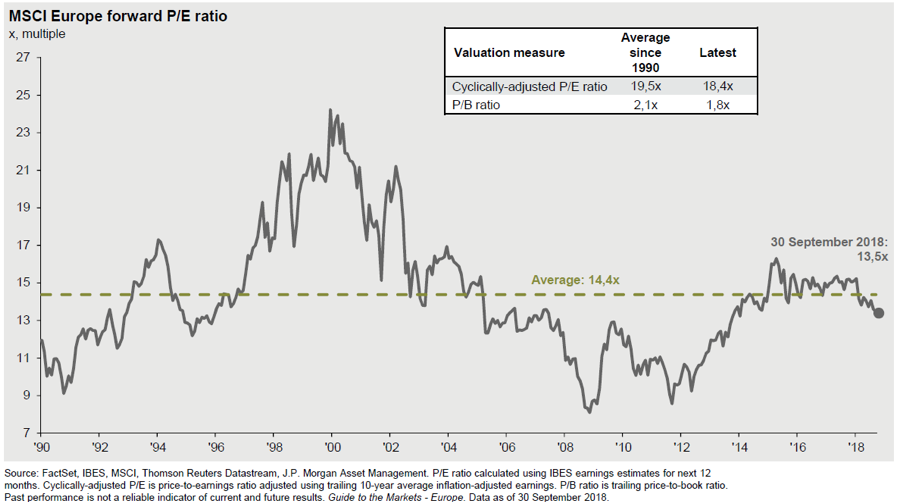 There was more positive news for the US economy, which added 250,000 new jobs in October, saw wages rise by 3.1% and unemployment down to 3.7%. “Wow! Incredible numbers. Keep it going,” tweeted the Commander-in-Chief.

Fortunately, the Dow Jones index contains a large number of companies that focus on profitability which helped the index rise 2% in November to end the month at 25,538.

With continued negative sentiment it is worth reiterating the growth forecasts for next year remain positive albeit slowing and equity valuations in the market are now below the long run average for all major markets on both a 12 month forward Price to Earnings ratio and Price to Book Value. This highlights that shares are definitely not overvalued at present and they currently reflect the negative sentiment and uncertainty present in the market. 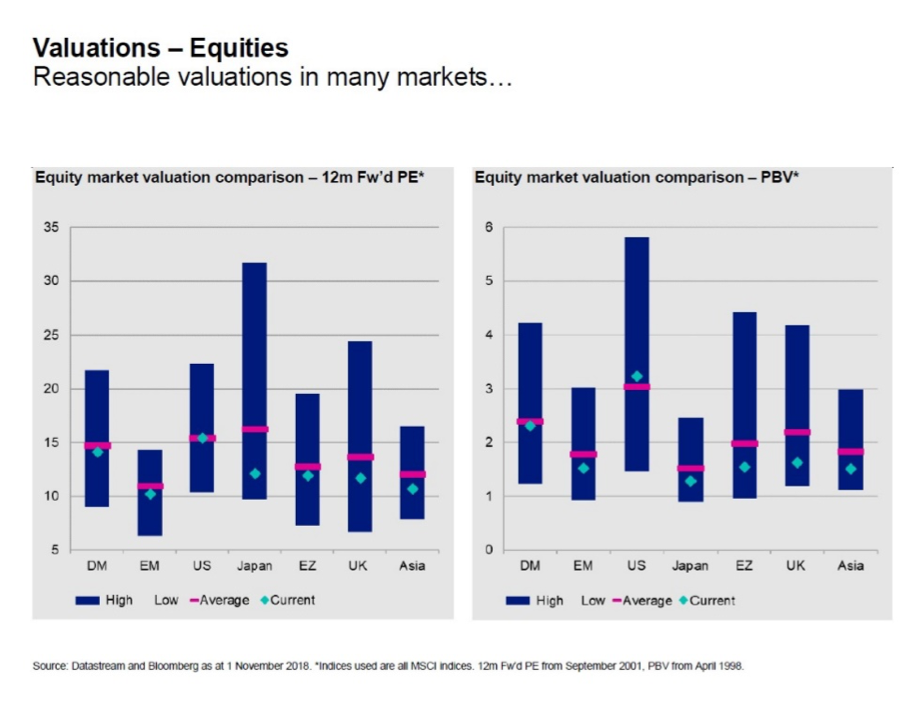