February was another month when all the important news seemed to happen in the last week of the month.President Trump met with North Korea’s Kim Jong-un for a second time, only for the talks to break down as the US refused North Korea’s demands for sanctions relief…

February was another month when all the important news seemed to happen in the last week of the month.

President Trump met with North Korea’s Kim Jong-un for a second time, only for the talks to break down as the US refused North Korea’s demands for sanctions relief.

While there was no agreement with North Korea, it does appear that the US and China may gradually be inching towards a settlement of their trade dispute, with the US delaying the implementation of further tariffs as the President stated that the two countries are “very, very close to a deal.”

India and Pakistan are, unfortunately, about as far from an agreement as it is possible to be. Tensions have escalated over the disputed region of Kashmir, with India striking at what it claims was a militant camp in Pakistan, which retaliated by shooting down two Indian jets, before releasing an Indian pilot on 1st March.

So plenty of tension, discord and disharmony in the world. Thank goodness the Brexit negotiations are running so smoothly… Or perhaps not. With under a month to go until the UK is due to leave the European Union we are no further forward than we were this time last month.

What of world stock markets in the month? As you might expect, the indications that the US/China trade war would end were good news for all the leading world stock markets, and it was no surprise to see China’s Shanghai Composite index leading the way.

Despite a back drop of mixed market news flow in February, global growth projections remain robust with the OECD forecasting global GDP of 3.5% in both 2019 and 2020.

So here we are, on the 29th of this month the UK is due to leave the European Union. Is that likely to happen? According to the bookmakers, who seem to be at least as well informed as the politicians, it is likely that Article 50 will be extended beyond 29thMarch but that the UK will eventually leave the EU with some sort of deal. 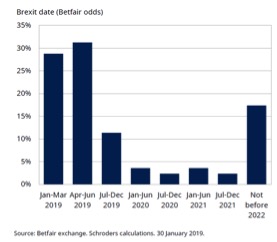 Of course, extending Article 50 needs the consent of the other members of the EU, but it is by no means certain that Europe will agree to an extension. There are plenty of suggestions that Europe is as poorly prepared for ‘no deal’ as the UK is, but could a country like Holland – which clearly wants to attract British business post-Brexit – block an extension?

Meanwhile Labour has committed itself to backing a second referendum and Theresa May has yet again kicked the can down the road, delaying any further meaningful vote in the Commons until 12thMarch. She is presumably hoping to use the time pressure and the threat of a long delay to win enough support from staunch Brexiteers to get her Withdrawal Agreement through parliament.

By our next market commentary, it will all be settled. Will there be a short delay to Brexit or will the UK have left the EU with no deal almost by accident? Given the rollercoaster ride that is Westminster politics, anything seems possible.

In the UK, equities remain unpopular, two standard deviations below their historical average – a similar level to that seen in the immediate aftermath of the referendum in 2016.

As the Brexit clock ticks, recent rallies in sterling suggest the market would welcome any sort of agreement that helps pave the way for leaving the European Union. 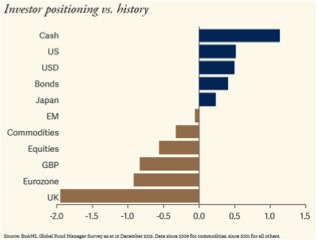 Although the extreme underweighting is understandable given the uncertainty,recognising when sentiment and fundamentals diverge is important and the situation in the UK has resulted in high quality companies trading on very attractive multiples, with supportive dividend yields of around 5%.  So, through the cloud of negativity, an opportunity to buy sensible UK companies for extremely low multiples seems to be arising with today’s opportunity not feeling to dissimilar to the opportunity presented to investors during the height of the eurozone crisis in 2011 – and perhaps only a little short of the opportunity in early 2009, in the wake of the global financial crisis.

Away from a valuation perspective, the fundamentals for the region also appeal, as growth forecasts released in February shows that growth is predicted to be 1.4% in 2019; yes, that is the lowest growth rate for six years, but growth is still growth and it is also well ahead of the forecasts for Germany and the rest of the Eurozone.

If the UK news was the usual mixture of good and bad in February, for Europe it was mainly negative, especially if you were a French shopper. The month started with a new law designed to prevent shops selling big brands at cost price, forcing many shops to put their prices up.

Rather more seriously, the Eurozone backdrop is becoming more troublesome thanks to ongoing bilateral trade tensions and deteriorating economic data. Weaker PMI Data (Purchasing Managers’ Index) showed that European economies are losing steam and since the start of 2019 further macroeconomic data has shown that each country has its own reasons for the slowdowns; for example, yellow vest protests continue to disrupt business activity in France, whilst in Italy, an unstable populist government is still struggling to hold up a fragile banking system. In Germany, the vitally important auto industry has struggled to adjust to new lower emissions standards and tariff costs as declines in exports have suppressed its economy.

Overall, the economic malaise in Europe comes with growing nationalism in world politics and international trade, leading to a lesser consensus about the future of the Eurozone or at least on any reform there.

For now, though, the news on the major European stock markets was good, no doubt helped by the thaw in relations between the US and China. The German DAX index rose 3% in the month to 11,516 whilst the French stock market did even better, ending February up 5% at 5,241. Valuations of European equities continue to look attractive based on a forward price to earnings ratio.

February got off to a good start in the US as figures showed that the economy had added 304,000 jobs in January, way ahead of economists’ expectations of 165,000 jobs.

As we have discussed above, the President announced, and subsequently had, his meeting with Kim Jong-un and moves were made towards ending the trade dispute with China. Donald Trump even appeared to take a more conciliatory tone with regard to Chinese telecoms company Huawei, having previously signed an order prohibiting the purchase of their equipment for 5G networks in the US.

The big news in the region was, of course, that the US/China trade dispute looks like it might be coming to an end. Will that counteract the slowdown in the Chinese economy, which is having ripple effects across most of the world’s economies?

The current slowdown is the biggest China has seen in 30 years: traditionally, the answer to a slowdown in China has been ‘build stuff.’ Now it appears that the emphasis might be shifting to ‘buy stuff’ as domestic consumption takes over from state backed investment as the main driver of growth. The government duly unveiled a series of stimulus measures to manage the slowdown.

President Xi Jinping has spoken of the switch to domestic consumption being “a struggle,” while several economists have pointed out that China’s goal is no longer growth, but stability.

As you would expect, February was an excellent month for China’s Shanghai Composite Index, which soared 14% to 2,941. The other markets, though, behaved far more sedately, with Japan rising 3% to 21,385 while the Hong Kong market was up by 2% to 28,633. The South Korean market was down by just ten points – unchanged in percentage terms – at 2,195.

In February Nike released its range of self-lacing “sneakers” which are both self-lacing and self-tying. The Adapt BB range has been dubbed “the future of footwear” and is controlled by an Android app.

In a release where they stated they had “reinvented the shoe lace”, Nike went on to say “Shoelaces: you had a good run. But we think we may have finally bettered you.”

It is fair to say that the consumers who forked out $350 for the “next-gen footwear” are less impressed, with users being quick to point out that the app only synced with one shoe. One reviewer expressed his frustration on Google: ‘The software update had an error and now my right shoe won’t turn on!!! 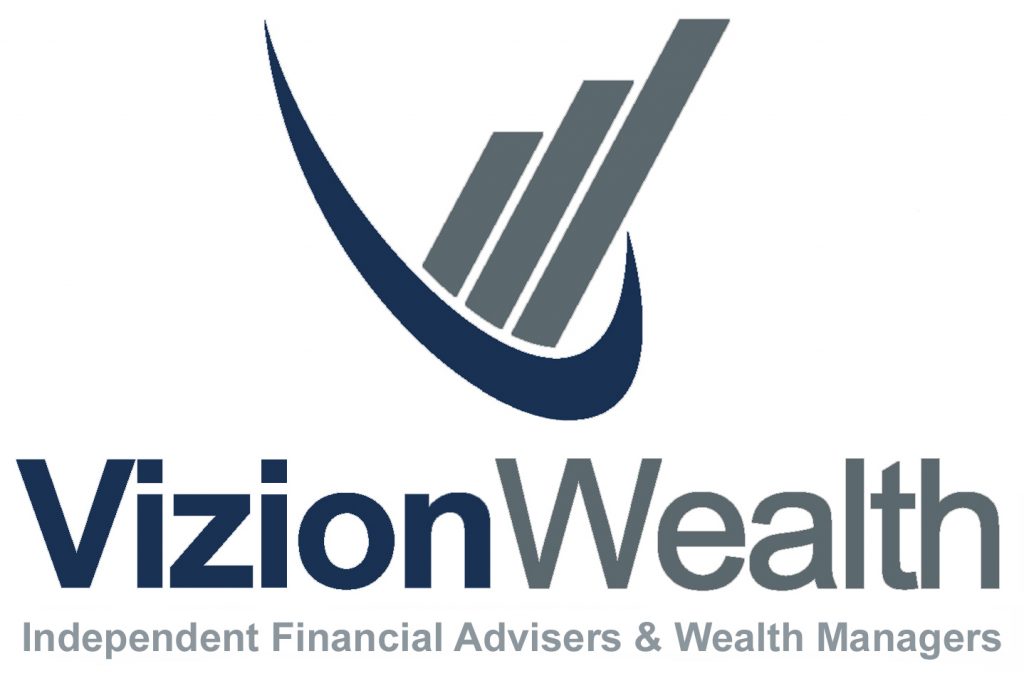